March 2023: A Sunlit Weapon will be released in paperback.

March 2022: Podcast on The Secret Library Podcast, marking publication of the 17th novel in the Maisie Dobbs’ series.

March 2022: Article by Jacqueline: Why reading the mystery is good for us in uncertain times.

February 2022: Article in The Big Thrill: Up Close: Jacqueline Winspear.

September 2021: This Time Next Year We’ll Be Laughing paperback released.

January 2021: This Time Next Year We’ll Be Laughing is nominated for an Edgar® Award for Best Critical/Biographical work.

Winspear, whose work combines realistic historical plots with lovely, unobtrusive prose, has won numerous awards, and rightly so.
—Richmond-Times Dispatch
Fiction at once fresh and timeless, intimate and sweeping…
—“O” Magazine
What Winspear does, brilliantly and poignantly…
is to bring home the enormity of the war by making it personal…
—NPR.org
[Winspear’s] writing is lovely, elegant and welcoming.
—Bestselling memoirist Anne Lamott 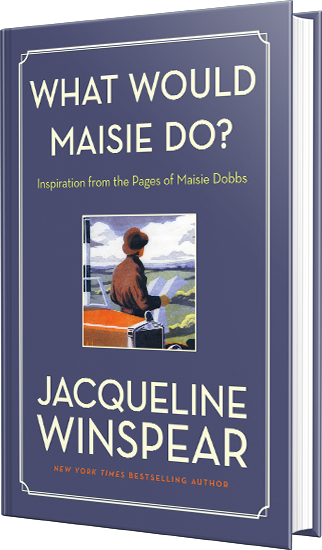 What Would Maisie Do?—a collection of readers’ favorite passages from the Maisie Dobbs’ series, together with the story behind each passage, sections on locations featured in the books, and pages for journaling.
Check out the community page:
Join Jacqueline