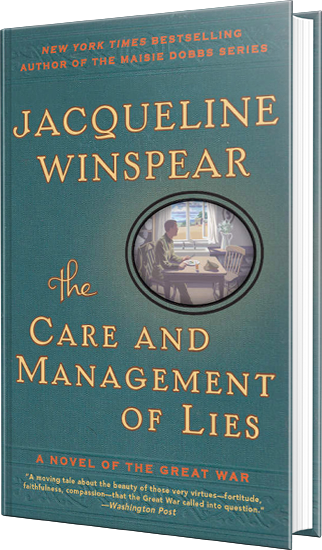 The Care and Management of Lies

By July 1914, the ties between Kezia Marchant and Thea Brissenden, friends since girlhood, have become strained—by Thea’s passionate embrace of women’s suffrage, and by the imminent marriage of Kezia to Thea’s brother, Tom, who runs the family farm. When Kezia and Tom wed just a month before war is declared between Britain and Germany, Thea’s gift to Kezia is a book on household management—a veiled criticism of the bride’s prosaic life to come. Yet when Tom enlists to fight for his country and Thea is drawn reluctantly onto the battlefield, the farm becomes Kezia’s responsibility. Each must find a way to endure the ensuing cataclysm and turmoil.

As Tom marches to the front lines, and Kezia battles to keep her ordered life from unraveling, they hide their despair in letters and cards filled with stories woven to bring comfort. Even Tom’s fellow soldiers in the trenches enter and find solace in the dream world of Kezia’s mouth-watering, albeit imaginary meals. But will well-intended lies and self-deception be of use when they come face to face with the enemy?

Learn more at The Care and Management of Lies website

A quietly powerful story that more than holds its own…
—The Washington Post
Winspear has created memorable characters in a moving, beautifully paced story of love and duty.
—Booklist
An engaging picture of the human spirit in a distant time of war…
—Author Herman Wouk
A haunting evocation… Jacqueline Winspear knows her native England, and the human heart, very well indeed.
—Author Adam Hochschild
The wonderfully talented Winspear writes irresistibly… her richly complex characters walk right off the page and into our imaginations.
—Author Margot Livesey

“Fiction at once fresh and timeless, intimate and sweeping, that chronicles the challenging friendship between a suffragist and a farmer’s wife. Set against the backdrop of the Great War, it’s a rare stand-alone novel by the author of the beloved Maisie Dobbs series.”
—Oprah.com (“O” Magazine)

“Without questioning either the cause of the war or the dubious tactics employed, seemingly, to ensure maximum loss of life for minimal military advantage, these characters simply get on with it, reaffirming our faith in the possibility of everyday nobility. A sad, beautifully written, contemplative testament.”
—Kirkus, Starred Review

“It’s been almost exactly a hundred years since the start of World War I, and amid all the commemorations, the first best seller pegged to the centennial is not a history but a novel: Jacqueline Winspear’s The Care and Management of Lies enters the hardcover fiction list at No. 16. Winspear, who now lives in the San Francisco Bay Area, was born and raised in Kent, England, and is no stranger to the war to end all wars—her Maisie Dobbs crime series, about a British psychologist grappling with the war’s aftermath, makes regular appearances on the best-seller list. But The Care and Management of Lies is a stand-alone novel, about a young bride who learns to take care of the family farm after her husband is sent to the front. (It was inspired by “The Woman’s Book,” a 1911 homemaking manual that Winspear quotes throughout.)”
—New York Times Book Review: Inside The List

“A moving tale about the beauty of those very virtues—fortitude, faithfulness, compassion—that the Great War called into question…The Care and Management of Lies is a quietly powerful story that more than holds its own in a publishing season crowded with novels and nonfiction commemorating the 100th anniversary of the start of World War I.”
—The Washington Post

“The Care and Management of Lies pulls readers immediately into Kezia’s life. Thanks to a pitch-perfect setting and many-layered characters, we are there as she struggles to find her way in the world, falling in love and striving to be the wife she feels her husband deserves, and then struggling to maintain the farm while enduring the yearning their separation brings. Along with an impossible-to-put-down page-turner of a tale, thought-provoking and still timely questions about the nature of war linger on after Winspear’s latest literary success is closed for the final time.”
—Bookreporter

“The Great War’s impact on the home front and battlefield is portrayed in Winspear’s winning stand-alone tale about two girlfriends and how their disparate lives entwine when one of them marries the other’s brother…While questioning war’s value and showing its terrible effects off the battlefield, Winspear fashions a stunning trajectory for her main characters.”
—Publishers Weekly

“In a stand-alone departure from her popular post-WWI mystery series featuring psychologist Maisie Dobbs, Winspear has created memorable characters in a moving, beautifully paced story of love and duty.”
—Booklist

“Winspear’s fans should welcome the keen period detail and thoughtful tone so familiar from the Maisie Dobbs books, while historical fiction readers will be gripped by this sensitive portrayal of ordinary men and women on the home front and battlefield.”
—Library Journal

“There is power in subtlety. This one is a stunner.”
—Martin Cruz Smith

“Jacqueline Winspear, who is known for her Maisie Dobbs mysteries, has moved into another sphere with this book. It is by far the best writing she has ever done, and it is memorable for its reliance on what was left on the home front as the men disappeared to France … Jacqueline Winspear is to be congratulated on a moving and remarkable book.”
—The Washington Times