It's publication day for The Consequences of Fear!

By the time you receive this newsletter, I think a good number of you will already have read the book and know the story of young Freddie Hackett, the messenger boy who witnesses a murder—then comes face-to-face with the killer. But there is more to The Consequences of Fear, as readers will find out—and I'm not giving any more away here! 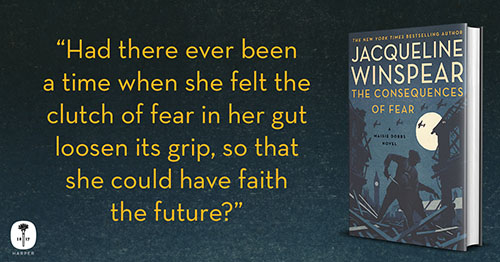 During this time of lockdown, I've been viewing various movies and documentaries that might not usually pique my interest. Last night I watched a documentary about the life of the famed hairdresser, Vidal Sassoon, who revolutionized haircutting for women in the 1960's. Prior to Sassoon coming on the scene with his own salon, women's hair was snipped, rollered, backcombed and sprayed into submission—but Sassoon gave women a certain freedom with groundbreaking stylish haircuts that needed just a good blow-dry and they were good to go. So, you may wonder—what does Vidal Sassoon have to do with Freddie Hackett?

Sassoon, born into poverty in London, lived in a tenement very much like the one young Freddie lives in with his family. He later lived in an orphanage, but at the outbreak of war was evacuated. When he came home at the age of 14—the age when most children went out to work—he managed to get a job as a bicycle messenger, running messages all over London during the bombings, even at night. Sassoon described cycling along, seeing the dead, the bombers overhead and fearing for his life. My father was not evacuated, and at the outset of war was one of the very fast runners plucked from school to deliver messages between Air Raid Precautions (ARP) depots, but he likely saw the same terrors that Sassoon witnessed—and his story became the inspiration for young Freddie Hackett.

Here's a photograph of an ARP messenger boy in WW2 London. 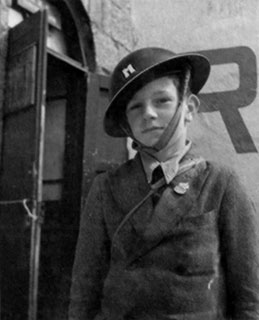 As always, publication day heralds a very busy time for any author. I've already started the round of virtual events, and if you click on this link, it will take you to the list of events with contact and registration details.

For those of you who would like to purchase signed copies of The Consequences of Fear, I have signed a great number of books in advance, with copies distributed to a range of local bookstores, including those hosting my virtual events. In addition, Barnes and Noble stores have available a special edition of The Consequences of Fear, featuring my exclusive essay on "Place" in the Maisie Dobbs series.

I have one final story about Vidal Sassoon. When I was twelve, a cousin—who to me was the ultimate fashion icon—went to train with Vidal Sassoon in London. OK, so she left after a short time to train somewhere else, because instead of learning hairdressing, she was taking clients' dogs for walks. But I so wanted a "Sassoon" haircut! At twenty-one, soon to leave college, I learned that there were "training days" at the salon, where you could be a guinea pig, and that under Sassoon's tutelage you could get a cheap haircut from one of his trainees. Well, that was the rumor. I had very, very long hair—past my waist, and it seemed time for a change. I trundled up to Bond Street, presented myself at the salon's reception desk and said I wanted it all off. A senior person was called to the desk. He lifted my long braid, and looked me in the eye. "If I cut this you will cry all the way home. No, we're not cutting your hair and making you miserable." And that was it! My chance for a Sassoon-style makeover ended before it even started!

But now, whenever I see Vidal Sassoon's name, instead of thinking about my missed makeover, I will think of him as a boy, taking messages through London during the bombings, and I will think of my father—and young Freddie Hackett.

I hope you enjoy The Consequences of Fear.

With my very best wishes,