First, before anything else I write, I hope this email finds you and yours well, and that you've been able to find some gifts in this time of "lockdown"—it's a tough one for sure, but I've always tried to find some sweetness hidden within the more bitter events in life. I'm hoping this time of protest in the United States and around the world, sparked by acts of terrible brutality (and that's only the acts for which evidence is available), will give rise to a new society, a society where there is opportunity for every human being to live a good life, and among us all there exists a kinder, more accepting and encouraging way of being the world. I hope that will be the outcome.

As you know, I usually write my newsletters in advance of a new book being published—I like to write about my research, so readers gain insights into aspects of social history that have piqued my interest enough to wrap a story around another place and time. However, my next novel is not due until March 2021, but in the meantime, in November of this year, my memoir will be published. The title: This Time Next Year, We'll Be Laughing.

I know—you might have thought I'd only just come up with the title, when set against all that is happening in our world. But instead, it's something my father would say during those times when our family seemed to be going through another dip. Whenever a threat entered our family orbit ready to take us down, my father would smile and say, "Never mind—this time next year, we'll be laughing!" The moment those words were uttered, it was as if sunshine had burst through the windows. In my mind's eye I could see into the future—there we were, the Winspears, laughing with joy at our good fortune, and it would all happen in just a year. With those words Dad had thrown out our line into the future; we saw that grappling hook attach itself to the rock of tomorrow and we knew we could pull ourselves in toward better times. I still say those words to myself whenever the road ahead looks a bit dodgy. 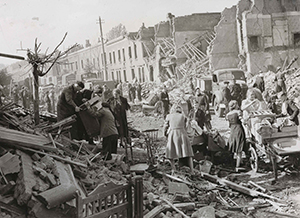 Memoir was my literary love ever since I read Life With Mother Superior by Jane Trahey, when I was ten years old. Even though the heroine of the story—born in Chicago—was raised in a very different place and a different time, and had a life completely unlike my life in rural Southeast England in the 60's, I realized that there were universal truths in memoir. It was as if there were threads that joined us, no matter who we were and where we were from. I liked finding those truths, finding points of connection. Now, every time I write a personal essay—perhaps for publication or for my Facebook page—I receive messages from people whose backgrounds are very different from mine, usually born in another country, at another time—but there was something in my experience that resonated with them, and they were taken back on their own tide of remembrance. 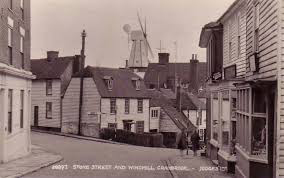 I grew up two miles outside this small town. Cranbrook in Kent, England

I have written about my parents and grandparents in my memoir, for I am of them and the defining experiences of their lives have had a significant bearing on my life—as your family impacted who you are. My young parents left the bombsites of post-war London to make a new life in the country. Housing was hard to find—thousands of homes had been destroyed—but when they saw an advertisement for an old gypsy caravan for sale, they took every penny of their savings and bought it. The seller towed it to a farm in Kent for them, just in time for the hop-picking season. And that's how my mother—who was not only a qualified book-keeper, but worked at the secure government telephone exchange—and my father, a master craftsman in the building industry—became farm laborers. Their closest neighbors were a family of Romany travelers (the spelling "Romani" is more common now), who came to their aid in that first tough winter. 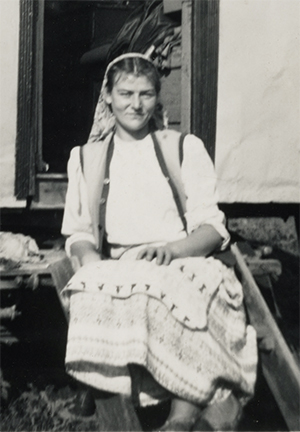 My mother on the steps of their "gypsy" caravan

But that's just the beginning of the story—before I even stepped onto the stage.

The elements of endurance and resilience are woven into the fabric of my memoir, set against the backdrop of a rural childhood. So many of us grew up with those traits drummed into us, and we're learning them anew this year, drawing upon the strengths passed down to us. I think that's something for us to remember—the very fact that we are on this earth is a result of our ancestors enduring the worst of times. Plagues have come and gone before—and our ancestors made it through. They persevered through wars, social unrest, prejudice and sickness; they drew upon powers of survival to pull through all those yesterdays, and they took the bad with the good. Our existence is testament to their fortitude—now we have to draw upon that hardiness woven into our DNA as we throw out our line into the future and play a part in the crafting of a better tomorrow for everyone. And as my Dad would have said, "This time next year, we'll be laughing!"

I'll be back again to tell you more about the stories woven together in my memoir.

I wish good health for you and yours. Take care.