About eighteen years ago I read a book called The Dream Society, by Rolf Jensen who, at the time, was Director of The Copenhagen Institute for Future Studies. "Futurists" are in demand by corporations intent upon getting to the next wave while it's still a whitecap in the distance—keeping ahead is the name of the game. Jensen's book was inspired by a client who asked him what the next age would be—pointing out that the Agrarian Age had lasted about 10,000 years, the Industrial Age about two hundred, and here we are in the Information Age. He wanted to know what came next. Jensen thought about it and said, "The Dream Age" and the book emerged from his thinking on the subject—which interested me more as I read because, growing up, I lived that dream, and it's connected with what I do now. 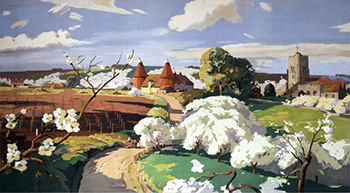 The very best of Kent, England, where I grew up.

The Dream Society is about the age of storytelling and the stories we tell—and love—about the past. Jensen pointed out that just two hundred years ago most humans had their feet on the soil every day. We are hard-wired to be people of the land, and our very ancient selves haven't really developed enough to withstand the fact that so many of us never touch the earth as we go from home to office or factory, yet we have moved away from that very precious heritage. Thus Jensen predicted a rise in such things as "eco-travel" and the fact that people would increasingly be drawn to stories around their purchasing—it was that yearning to have our feet on the earth that would drive us to experience it in any way we could. He gave an interesting example of how this would play out—in Denmark more than 50% of eggs sold in the shops were organic "free range" eggs from hens living outdoors. Those eggs cost more and they taste pretty much the same as battery hen eggs, but people buy them because there's a story connected to the land—and that story meets a need. I thought about that when I bought eggs yesterday and checked to make sure they were "organic from farm raised hens." You see, I was also "farm raised"—in fact, that's the essence of a story recounted in my upcoming memoir, This Time Next Year We'll Be Laughing. As a two-year old I toddled out into the garden every morning to choose my breakfast, the best brown egg from a clutch that our hens laid under the hedge.

In the memoir you can read about how my just-married young parents left post-war, bomb-scarred London to build a new life in the country, for some years living in a small gypsy caravan they'd borrowed money to buy. A farmer in Kent allowed them to situate the caravan on his farm and they became farm laborers, picking fruit, cutting down trees, spreading manure—whatever it took. Soon my mother's city-girl clothes had been cast aside in favor of jeans and rubber boots (and she had been quite the fashion plate). By the time I was born we were living in a "tied" cottage—tied to the land and my father's job in charge of the livestock—and my mother was doing the farm accounts and also working in the fields. 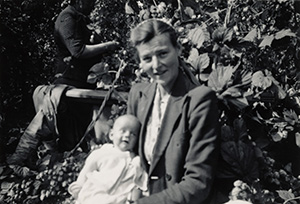 That's me—just a few months old,
out in the hop garden with my mother as she worked

From the age of six, through to my college years, I worked on local farms. I knew what it was like to ache from head to toe at the end of the day, and to never rid myself of the dirt under my nails or the bruises and scratches across my arms. But I felt a kinship to the land that I feel to this day. 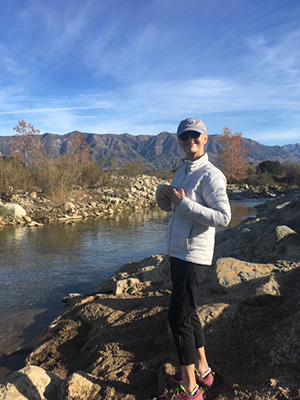 That's me again, close to the land in Ojai, California

Just the other day, I was reading that doctors are seeing increasing numbers of children with less than robust immune systems, which is being attributed in part to the fact that kids don't play in the dirt any more. If that's so, mine should be made of steel, having stood me in good stead since childhood! 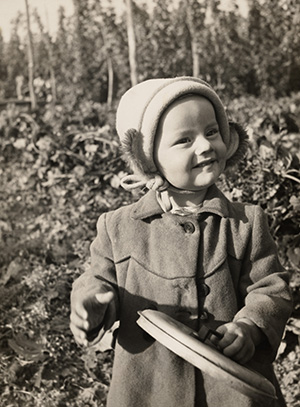 Here I am at eighteen months—it's hop-picking time again,
and I'm playing in the dirt with an old saucepan

In my memoir I also describe what happened to inspire me to declare, at five years of age, that I wanted to be a writer. It would take another forty years before I wrote the story that became my first novel—but I'm a patient person. That's something you learn from the land, along with endurance and resilience.

Until the next time, I wish you well. Get your hands in the dirt—it'll do you good!

PS: You can read more about This Time Next Year We'll Be Laughing, along with an excerpt here: www.thistimenextyearbook.com