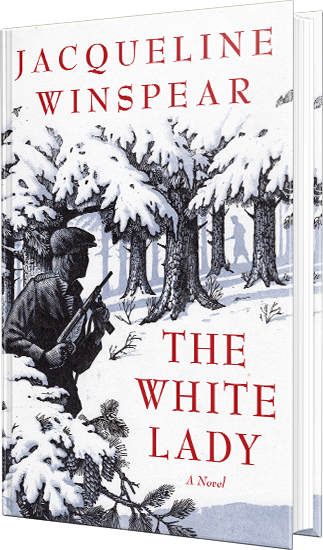 The White Lady introduces yet another extraordinary heroine from Jacqueline Winspear, creator of the best-selling Maisie Dobbs series. This heart-stopping novel, set in Post WWII Britain in 1947, follows the coming of age and maturity of former wartime operative Elinor White—veteran of two wars, trained killer, protective of her anonymity—when she is drawn back into the world of menace she has been desperate to leave behind.

A reluctant ex-spy with demons of her own, Elinor finds herself facing down one of the most dangerous organized crime gangs in London, ultimately exposing corruption from Scotland Yard to the highest levels of government.

The private, quiet “Miss White” as Elinor is known, lives in a village in rural Kent, England, and to her fellow villagers seems something of an enigma. Well she might, as Elinor occupies a “grace and favor” property, a rare privilege offered to faithful servants of the Crown for services to the nation. But the residents of Shacklehurst have no way of knowing how dangerous Elinor’s war work had been, or that their mysterious neighbor is haunted by her past.

It will take Susie, the child of a young farmworker, Jim Mackie and his wife, Rose, to break through Miss White’s icy demeanor—but Jim has something in common with Elinor. He, too, is desperate to escape his past. When the powerful Mackie crime family demands a return of their prodigal son for an important job, Elinor assumes the task of protecting her neighbors, especially the bright-eyed Susie. Yet in her quest to uncover the truth behind the family’s pursuit of Jim, Elinor unwittingly sets out on a treacherous path—yet it is one that leads to her freedom.

Winspear is an absolute master of the character-driven thriller…
—Booklist, Starred Review
The White Lady is a perfect fit for lovers of historical mysteries featuring intrepid, resourceful women who emerge as equal to their male colleagues and sometimes are more courageous.
—The New York Review of Books
A poignant story of courage, misogyny, and misused power. A tense history-based thriller filled with anguish and suspense.
—Kirkus Reviews, Starred Review
Smart, nuanced… The chapters illuminating Elinor’s dramatic backstory add vulnerability to her characterization, enriching the suspenseful main narrative.
—Publishers Weekly
This is both fast-paced and thoughtful, bold and nuanced, a thriller that is thrillingly human. I loved it.
—Louise Penny

No one does this better than Jacqueline Winspear.
—Lee Child

“Winspear is an absolute master of the character-driven thriller . . . [and] the real strength of the novel, lies in the poignant and beautifully written backstory of Elinor’s childhood in war-torn Belgium and her personal losses in a devastated London.”
—Booklist, Starred Review

“The award-winning author of the Maisie Dobbs series skillfully juggles three timelines in a riveting stand-alone about a woman whose wartime experiences overshadow her post-war retirement.”
—Library Journal, Starred Review and Pick of the Month

“The White Lady is a perfect fit for lovers of historical mysteries featuring intrepid, resourceful women who emerge as equal to their male colleagues and sometimes are more courageous. As a neighbor comments about Elinor, ‘She’s handy with a gun.’ And she’s very clever. This is an excellent outing for Winspear.”
—The New York Journal of Books

“The White Lady is a triumph of storytelling. Rarely have I been swept up into a novel, into the lives of the main characters, so quickly and thoroughly. Winspear creates in Elinor White (The White Lady), a complex, endearing, achingly flawed hero. This is both fast-paced and thoughtful, bold and nuanced, a thriller that is thrillingly human. I loved it.”
—Louise Penny

“The White Lady is wonderful … a tense and twisty character-driven thriller, a heartfelt tribute to the twentieth century’s bravest women, and a perfect match between story and storyteller. No one does this better than Jacqueline Winspear.”
—Lee Child

We use cookies to ensure that we give you the best experience on our website. If you continue to use this site we will assume that you are happy with it.OK